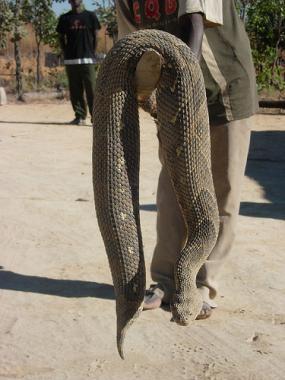 Today, not even the most adamant critic of living in Sub-saharan Africa, would suggest that it was a particularily unhealthy area in which to live.

This shows how very far medicine has advanced in the last 100 years, because for well in to the 20th century, Africa, and West Africa in particular, was called ‘The White Man’s Grave.’

If the snakes did not get you, then disease would! Caucasians dared not venture into Africa without donning a pith helmet and a spine pad, otherwise heat stroke or brain damage would strike them dead. Jackboots were strongly advised for both male and female attire because behind every bush a poisonous snake might strick and the leather of such boots offered a slight chance of survival. Every snake should be killed on sight, despite the fact that less than 10% of the snakes of Africa are seriously poisonous. It was thought that if they bit you, they injected you with poison through their fangs. And non-poisonous snakes like pythons were constrictors, who could strangle you to death and then swallow you whole! There was no 100% cure for a snake bite; the anti-venom serums were only about 60% effective. The majority of snake bites took several hours to kill you. Others killed you instantly. The ones that took several hours to kill might, if you were lucky, responded to a series of timely anti-venom serums and death might be avoided. One did of course have to have the serum handy and there were certain serums that had to be frozen at all times. Serums effective against African snakes were and still are the least available. There were alternative anti-venom serums, and if you injected the incorrect one then the cure itself became a killer!

If you managed to avoid the sun and the snakes, then you would almost certainly catch malaria. Caucasians, in countries where mosquitos were known to spread malaria, relied on large doses of quinine and it was soon claimed by the imbibers that not only did gin contain the required substance, but when both gin and tonic were continually consumed, effective protection was more likely! By the late 1950s however, malaria tablets were available which if taken daily a week before being bitten prevented you from contracting malaria. Since then anti-malaria drugs have been improved.

Two more East African killer diseases, tick typhus and bilharzia were, a 100 years ago, a serious deterrent to European settlement of both East and West Africa.

During my 57 years in East Africa, I have had several interesting and exciting encounters with both snakes and sickness. Many years ago, I was visiting our New York agent who supplied us with American clients for our photographic safaris. They were publishing a new brochure and invited me to help its promotion at their expense. On arrival at JFK airport, to the 5-star Manhattan hotel, I felt distinctly ill. By 7 pm I was sweating like I have never sweated before and when I discovered I was covered in purple patches, the assistant hotel manager called me a doctor, a nice young man, who replied in a rather un-bedside manner fashion when he read my temperature, “One hundred and six point four! You should be dead!” Then he called an ambulance. An hour later found me delivered to Maddox Hill hospital on the edge of the Bronx. For two-and-a-half hours I waited on a stretcher in the hospital passage and every time a cute young Irish nurse whispered in my ear, “You are next,” a continual stream of more important casualties were wheeled past me. I later discovered these were the typical input of the Bronx on a Saturday night; 90% Hispanic and all gunshot or knife wounds!

The odd thing was that after a near midnight diagnosis by one of the doctors, I was immediately transferred from the crowded casualty ward to a private isolation ward of which I was the only patient. I noticed all nurses and cleaning staff wore face masks which rather surprised me. Then my backside received as many pricks as a well-worn pin cushion, as sample after sample of my blood was collected. The next morning I was feeling slightly more like living and presumably through the saline drip injected in to my right wrist, my temperature had settled down to 104, but the purple spots on the palms of my hands and on the soles of my feet were still blooming brightly. Morning shift and I received another visitation from a senior medical practitioner. He explained to me what the panic had been about. The hospital had been on the phone most of the night to the Washington tropical diseases hospital as it was feared because of my unusual symptoms and because they discovered that I had just flown in from Africa, that I could well be the carrier of the highly infectious killer disease Ebola. By mid-morning the Maddox Hill Hospital  stood down. I was only suffering from the common East African disease, called tick typhus. The most interesting feature of my four-day confinement was a continual procession of hundreds of doctors and interns, all of whom had never come across a case of tick typhus before.

My next encounter with dangerous Africa was with snakes. There can be few people in the world who have ever seen so many deadly poisonous snakes in one day that the little band of employees in the Kenyan safari industry did on the occasion I am about to describe.

On that day I estimated that I saw more poisonous snakes than I had ever seen before or ever would see in the future, all sightings combined. We had decided to pave the mess tent floor of our South Eastern Turkana camp with Mazeras stone, but our slabs did not come from the Indian Ocean as we discovered what we call Maji ya Mawe stones on the shores of Lake Turkana. One of our lorries was used to collect them as a team of half a dozen helpers led by myself removed them from the lake and with a hammer broke them down in to usable and attractive flooring flagstones of about 18 inches square. To dry them out, we piled three in pyramid fashion and must have made some hundred piles when we drove the collecting vehicle on to the sand at midday to load them up. Under nine out of ten of the pyramids was a fully grown puff adder! It took all my persuasive powers to assure my teammates that a sleeping puffer is a harmless puffer. Otherwise it is one of the most deadly poisonous snakes in the world.