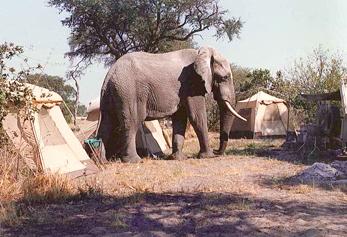 I hope the following anecdote will be of interest to Old Africa readers. Firstly, because it did happen in Africa about 50 years ago in the Northern Rift Valley province and secondly because I use it to bolster one of my obsessions; after a lifetime spent in being responsible for around 40,000 people on tented, photographic safaris, I am of the opinion that photographic safaris under canvas, recapture the atmosphere of the best traditions of ‘Old Africa’, whereas packaged safaris to the lodges do not! In the time I am writing about, there was one lodge in Samburu and three in the Masai Mara. I don’t think Samburu is too bad still but somebody told me the other day that there are now 150 different, permanent accommodations in the Masai Mara.

In the same way that different people have different pain thresholds so do they have different whinge thresholds. A classic example of this phenomena happened to me some time ago in Northern Kenya. I think it must have been in the early sixties because that is the time we stopped doing safaris for Thomas Cook and started doing them for Kuoni instead. The gentleman in question was a Thomas Cook client. He was also as I remember a key civil servant connected in some way to the Reading local government department. I came across him taking a photograph in broad daylight not of a leopard in a tree, nor a rhino visiting camp, but a close-up of the zip on the toilet tent. On closer inquiry I established that the gentleman found it his duty to send a photograph of the jammed zip on the long-drop camp toilet tent to Thomas Cook so that they would cease inflicting on their clients the appalling condition of equipment they had to suffer if they made the mistake of taking a Dick Hedges safari. He further explained that there was a water tank nearby from which the staff came to collect water and they might easily catch a glimpse of anyone using the toilet tent because the flap would not zip all the way down. It was useless my attempting to explain that the nearest track anyone took to the tent apart from those who intended using it was at least 100 feet away and the fault had only been reported to me the previous day and meanwhile the flap hung completely covering the opening, and in any case why on earth would anybody wish to spy inside a toilet tent.

The contrast about which I am talking occurred a few days later. A new zip had been flown into the camp from Nairobi but the expert needle man who had to sew it was out getting supplies for the camp and could not instantly attend to it. As we had a very special group in the camp, being a group of friends of the princesses of one of the Royal houses of Europe, and as I was passing nearby I thought I had best call in to apologise for the still-stuck zip. I met the eldest daughter, the princess who had arranged the group having breakfast in the mess tent. I started explaining to her why I was there.

“My dear Mr Hedges”, she said, “I wrote to my mum the Queen only yesterday advising her not to use the game park lodge next time she is up here, but to try and get in your camp instead. That bog you are talking about is the most enjoyable toilet I have ever used. I throw back the flap to the open position, and there in front of me is one of the most wonderful views I have ever seen while sitting on a bog. Two giraffes were necking in the foreground and the snow of Mt Kenya sparkling on the horizon. I cannot think of any palace where there is a bog with any view at all, let alone with one like yours!”

So all you young lovers heed advice from an old ’un for a change. Before you take a partner for life make sure you both have the same whinge threshold. Then you might just have a chance of living happily for ever after.