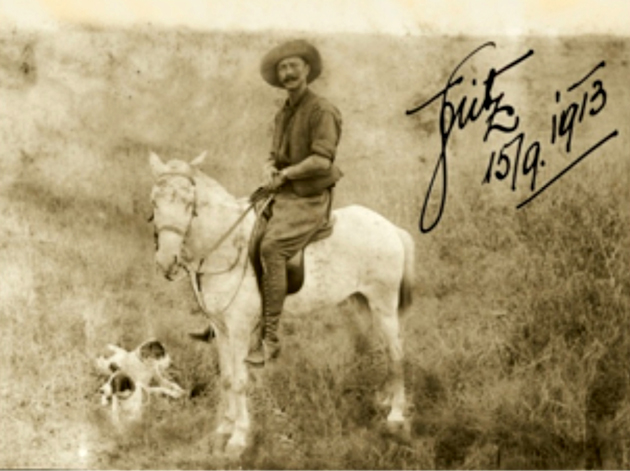 For the last two months I have been talking about the founding of the Scott Sanatorium, and the part Violet Donkin played in this. However, a year after the facility opened, she departed for England. Why? A scrutiny of the surviving manuscripts gives us a clue. We learn from The Leader of 24 January 1914 that Violet had recently left ‘upon medical advice.’ Then, in an obscure journal of Brian Havelock Potts held in the Bodleian Library, Oxford, we find that Potts served in the army after the outbreak of the First World War, contracted amoebic dysentery, and was taken to the Scott Sanatorium. There he was nursed by Violet Donkin, who had clearly returned to East Africa. She was, he learnt, to have been married to one Fritz Schindler before he was killed by a lion. If we then look at when Schindler met his unhappy fate, we find it was in January 1914. He was taken, badly gored, to the Scott Sanatorium, where he died. He must therefore have been nursed by his own fiancée. It is no wonder that she felt she must have a break.

Who was Fritz Schindler or, as it was frequently written, Schindelar? The British had a tendency to call all German-speaking people ‘Fritz.’ There was a Fritz Schindler in the Nandi district in 1901, involved in a brick-making operation at Entebbe in 1902, and we learn of trader Fritz Schindler in January 1905 buying cattle in Ruanda. This is probably the person who applied for a Resident’s Game Licence in 1909 in Nairobi. We know that he was a tall, thin man of Austrian or Swiss nationality, born about 1871, a former cavalry officer and womaniser whom it is said wore a spotless white suit and shiny boots. This is what Errol Trzebinski says of him in The Kenya Pioneers:

Schindelar was much sought after by the titled from Europe for his talent for bagging record heads for his clients. He was a wanderer who had arrived out of nowhere in 1906 and when not on safari, usually stayed at the Norfolk. He loved to gamble and would sit on the verandah at a table upon which were piled hundreds of gold sovereigns. His mysterious past made him as attractive to women as his looks, for little was known about him except that he had served in a crack regiment of Hungarian hussars. He was a first-class horseman, an ace shot and, because of his style it was impossible to believe his claim of having worked as a hall porter, luggage master and head waiter. However, at the Norfolk Hotel, to the amusement of staff who had a great affection for him, he did duty as a waiter himself occasionally. Arriving back from the bush with hair matted, clothes torn and skin covered in grime from the final march back to civilisation, he appeared two hours later shaved, moustache beautifully waxed, immaculate and ready to serve his friends’ orders on a tray or dance with the prettiest girl available.

Schindler got involved with the wealthy American big-game hunter and photographer Paul Rainey and assisted him as a white hunter. Rainey asked him to charge a lion with his fast white polo pony and although this was something Schindler had done several times, this time the idea was not to kill the lion but to photograph it. They set off from Rainey’s Naivasha ranch and in fifteen days killed eleven lions but failed to film a charging lion. On 21 January 1914 Schindler tried to cut off a lion at the mouth of the Ngasawa gorge and make it chase towards the camera. his meant he had to approach the spot where the lion lay hidden but unfortunately it bounded at Schindler and knocked him out of the saddle. He landed on his feet, but the lion knocked him down and straddled him, tearing out his stomach with its teeth. The other men bandaged Schindler and carried him to the camp while Rainey raced back to get his car and order a special train from Naivasha railway station. That evening the train left with Schindler on the six-hour journey up the eastern wall of the Great Rift Valley to the Scott Sanatorium, where he died on 26 January (the cause of death was given as peritonitis) and was buried in Nairobi South cemetery. Probably Violet could not bear to see him die, since she left just before this. For many years there was a photo behind the bar of the Norfolk Hotel of Schindler cradling a dying lion’s head. Across the foot he had scrawled ‘Dying in my arms’. The photo remained there until 1980 when a bomb destroyed the bar.

Violet Donkin returned to the Scott Sanatorium and resumed nursing. On the outbreak of the First World War the sanatorium was taken over by the government to treat military personnel, specifically with dysentery. Violet met the farmer Donald Sharp, of Sirimma, Suguroi, Laikipia, while she was nursing him back to health at the Sanatorium after he was wounded in the war. She married him in 1917. The lavish wedding party was held at Chiromo, Northrup McMillan’s house. The pair did not have any children and Violet died of cardiac failure at the farm on 31 May 1922. She was only 47. In her will she left £121.16.8d. Donald married again and died on 21 February 1949. He is buried in Nyeri cemetery.

The following images are reproduced here by permission of Charles Cooper and come from the albums of his grandmother Fanny Maud Cooper (née Paten), a masseuse [physiotherapist] at the Scott Sanatorium. Signed photo of Fritz Schindler from 1913. Miss Donkin camping near Nairobi in 1911.

The Scott Sanatorium at its opening. Scott Sanatorium nursing staff with Violet Donkin in the middle. Violet supervising the planting of the Sanatorium garden.