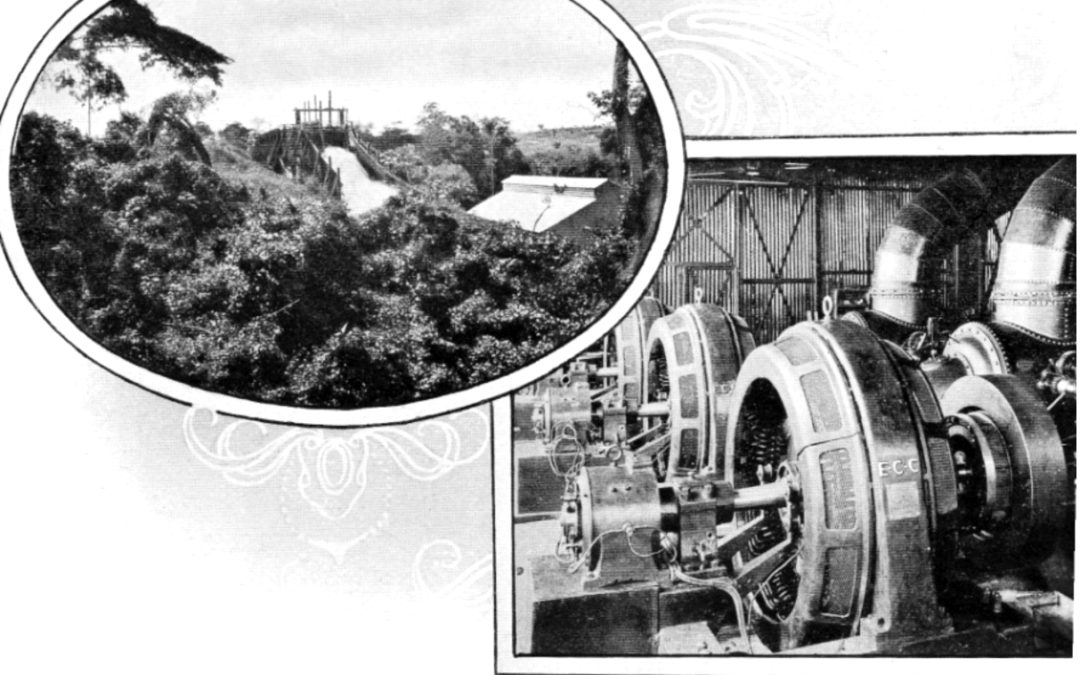 In order to supply electricity for lighting and power in the district of Nairobi, the Nairobi Electric Power and Lighting Company Limited, with a capital of £30,000, was founded in February 1906. Its originator was Clement HA Hirtzel (misspelt Hertzel in most sources), who had arrived in East Africa from South Africa in January 1904. Described as ‘a penniless counter-jumper from the Cape’ by McGregor-Ross, Hirtzel had actually been born in Exeter and had obtained engineering qualifications. He also had a motor car and motor cycle business in Nairobi, where he lived at Parklands, and he obtained a farm at Limuru. He was awarded an OBE and became a freeman of the city of Exeter, to which he later retired.

In April 1904 Hirtzel obtained a concession for fifty years from the Governor, Sir Charles Eliot, to supply Nairobi with electricity. He signed a draft contract to do so in 1905, and set up a company named the Nairobi Power and Lighting Syndicate. Charles Udall was chief engineer and the managing director was RC Bayldon, formerly a lieutenant in the Royal Navy, who later became chairman of Nairobi’s Chamber of Commerce. The general scheme was to generate electricity by means of water power, then running to waste, to supply Nairobi and the surrounding country. In November 1906 the company chose to use the first fall on the Ruiru River below the Fort Hall road, some 18-½ miles by road from Nairobi. A bungalow for the engineer was erected near the site of the works and the task of damming the river was undertaken. The engineer James Ernest Bedding was appointed to be in charge of the Ruiru generating station. He lived there with his wife Elizabeth Hannah Deakin and two daughters, Elsie and Eileen. But Elsie died at Ruiru aged eight, of inflammation of the brain. Bedding later joined the Thika Sisal Company.

The Ruiru dam, which was of concrete, was placed about 30 feet upstream of the fall, and was 200 feet long, 10 feet at the centre, on a base of 14 feet. It was difficult to get the supplies and materials to the site on East Africa’s then-primitive roads. The dam had to be built before April, as a temporary dam and diversion of the river would not withstand the floods caused by the rains at the end June. But the work was finished in good time. A timber flume on trestles was laid from the dam to the site of the powerhouse, some 700 feet away, with a carrying capacity of 46,000 cubic feet of water. At the end of this flume four gates were placed at the heads of steel pipes leading in to the powerhouse turbines. The main power station was built on the right bank of the river 300 yards from the dam. The framework of the building was of steel with the sides and roof of corrugated iron, making the whole fireproof. The station contained three turbo-generators, built by the electric construction company of Wolverhampton, with a total capacity of 500 BHP. The main line followed 13-½ miles, straight across country from the powerhouse to the main sub-station in Nairobi. The wires were carried overhead on porcelain insulators attached to steel poles spaced 40 yards apart at a height of 20 feet from the ground, being raised to 30 feet when crossing roads. The main sub-station, which delivered power to Nairobi, was a steel structure similar to the power house, about half a mile inside the municipal boundaries. All high-tension lines within the municipal area were protected by guard wires running the whole length of the line. The company was able to supply power for commercial areas after April 1908, and a month later a regular supply of power and light was provided. The sub-station operated for 24 hours a day, except on Sundays, when power was available only from 6 am to 6 pm. Eventually, 16 miles of public streets and roads were also lit.