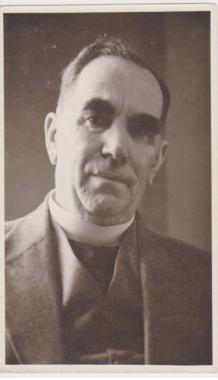 I wrote a blog about the fascinating Vladimir Vassil Verbi in the Old Africa blog page on 20 February 2013. Since then, much new information has come in about the missionary, mainly from his daughter Mary, and the story is so fascinating that it is worth telling here.

Verbi spent his early years in Shumla, Shumen, Bulgaria, where his father was a merchant. Originally Shumen was an Ottoman fortress linking areas with Istanbul. Vladimir was sent to a synagogue school for his education where he learnt Hebrew. When he was eleven Vladimir was taken to Istanbul by his father Vasil, whose brother had a textile business there. Also prominent in the Istanbul business world was J W Whittall, who persuaded Vladimir’s father to send him to school in England. The boy already had an uncle in England, his father’s brother Demetrius. Vladimir spent seven years at school in Manchester, becoming completely anglicised before he returned to Bulgaria at the age of seventeen. He then attended Robert College, an American high school in Istanbul.

At college Vladimir was influenced by the Nihilists, student agitators involved in anti-church activities. When they went to disrupt a meeting held by some missionaries recently returned from Uganda, Vladimir was so impressed that he joined a Christian group and offered himself as a missionary. Stanley’s In Darkest Africa made a great impression on him. In 1894 he somehow obtained a letter of introduction to Reverend A R Steggall, a missionary at Taveta, and travelled from the Red Sea to Zanzibar on a dhow. At Zanzibar Steggall, having just returned from leave, was collecting stores and porters to return to his mission at Taveta some 150 miles inland on the border of German East Africa and British East Africa. Steggall and Verbi went inland together, to Taveta.

At Taveta the language had to be learned, meat had to be shot, and crops had to be cultivated. Verbi was put in charge of the mission lads who were digging sweet potatoes, to see that none were stolen. His other activities were teaching in the school and helping to print the mission newspaper, the Taveta Chronicle.  In about 1896 information was brought to the mission that a party of slave traders with slaves was in the vicinity. Armed with a rifle, Verbi with the help of a few Baluchi (Indian) soldiers raided the encampment, setting most of the slaves free. Some of the slaves were accommodated at the mission until they could be repatriated. Most were youths and maidens, and one youth was the chief’s son from Mpare. His father came to claim him, and as a token of esteem, Verbi was presented with a Colobus monkey skin and a long staff, both the insignia of a chief. The handsome black and white monkey skin is still in his daughter’s possession.

Verbi initially received no payment for the work he was doing, but a small stipend was arranged. In 1896, two unmarried sisters Daisy and Lizzie Mayor joined the little community. Verbi wooed and won the lovely Daisy (Dinah Mayor), four years younger than himself, and they were married while on leave in England on 27 September 1899. Daisy was the daughter of Joseph Mayor, a master spinner in a cotton mill. Verbi attended a crash course in tropical diseases at the Royal School of Tropical Medicine in London. He was taught to vaccinate, to deliver babies and to draw teeth. He bought a microscope and made himself proficient at taking blood slides to diagnose diseases. Armed with his new knowledge and a trunk full of drugs and smallpox vaccine, he was ready to return to Africa. While all this was going on, Verbi studied for the priesthood and was ordained deacon. He was immediately attached to a parish in Whitechapel, a notorious slum where even the priests went about in pairs.

Verbi was very masculine, blue-eyed and good looking, with heavy black eyebrows and large feet and hands. He had used his mother’s sewing machine in Bulgaria, so in England he made ladies’ blouses which were sold for mission funds. He and his wife returned to Africa in 1900, and had two sons, Albert Basil and Joseph Boris. The health of the family degenerated. Through the successive bouts of malaria and blackwater fever, the family was so ill that the mission decided to send them back to England to recuperate in 1904. Daisy had another son while there, Vladimir Charles. Verbi returned to his beloved Africa alone. It was to be about two years before he was to see his wife and new baby again, and much longer before he saw his two older sons, who stayed in England for their schooling. He busied himself opening a new mission in the Taita hills.

There was already a CMS station at Mbale run by Richard Maynard. Verbi chose a site about five miles away, at Wusi on the other side of the hills. He had first to ensure a fine water supply and he built a stone house on a spur, with a charming aspect, where water was obtainable by gravity. His Aunt Amelia in Manchester had died and left him a small legacy, and this enabled him to be independent to the point where he paid both the owners and the Government Land Office for the land and had it registered in his own name. This was the origin of the mission at Wusi.

After Verbi’s shooting of his mother-in-law, described in my previous Verbi blogs, Verbi was acquitted and he returned to his mission. His wife and daughters stayed with him until his wife was left some money and bought an up-country farm. Thereafter the children stayed with either parent.