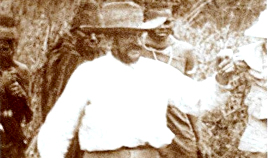 AARUP, Peter M., son of Joergen Madsen Aarup, was born in 1863 in Kolding, Denmark. He went to South Africa, to the diamond mines, and we first hear about him in East Africa in 1900. By 1906, according to an advertisement he placed in the East African Standard, he has set himself up in Mombasa as a  boat builder, boat sailmaker, tent maker (any size), and purveyor of tarpaulin waterproof sheets. He moved his business to Naivasha by 1909, adding taxidermist to his list of accomplishments, and the manufacture of horsewhips made of hippopotamus hide. His boatyard offered boats for hire (Advertiser, 1909). According to Lars Therkelsen, Aarup’s grandson who has written a biography in Danish of his grandfather – Gamle Knudsen, 2018 – he expanded to Lake Victoria, developing novel fishing methods, but he once lost some of his boats in a storm, when everyone drowned except Peter Aarup.

When the First World War began in East Africa, Aarup and his boat crew were taken prisoner by the Germans, who asked him to establish a new sawmill. His sight was so weak that he had to use very strong glasses. One day they broke and the Germans could not help him replace them. Peter Aarup’s ‘captain’, Kazimoto, offered to collect spare glasses from Peter’s home in Kisumu. This was a very dangerous trip of 900 km, through both German and English front lines and country teeming with wild animals. Nonetheless, Kazimoto returned with the glasses. After the battle in Bukoba the English took back Peter Aarup as a prisoner. Eventually he was released. Ten years later we find Aarup staying with Karen Blixen at her farm in Karen outside Nairobi. She wrote to Ingeborg Dinesen about him: ‘I have had such trouble with the old Dane Aarup. I promised he could have a house on the farm for a while.  He is almost completely blind and cannot do anything for himself, and then he is such a frightful chatterbox.  I can’t have him living in the house because he is almost always slightly drunk and is always getting involved in dreadful quarrels with the natives.  In spite of all this I like him very much.  I presented him with a big box of cigars that Finch Hatton had left behind in which has made me “his friend for life”.’  A week later Karen writes again to say Aarup is still there and is a frightful nuisance, especially towards white people.  She arranged for him to get a kind of pension from the government of two shillings a day.  ‘It is not much, of course, but it does make a difference for him, for otherwise he has nothing.  He is so very Danish that I can’t help liking him in spite of all his faults.’

Two months later, on 7 April 1924, Karen found him dead, lying in the road leading up to her house.  Three policemen came with a coffin to fetch him and the next day Karen set off for his funeral at Forest Road cemetery in Nairobi, but her car broke down so she did not get there.  She said she missed him because he was the only person she had been able to talk Danish with, but she thought his death was a blessing to him because he was almost completely blind and his general health was quite ruined.  She thought he had probably never lived in a very sensible way.  ‘He was always in good heart and still perpetually making plans for what he was going to do.  He had a remarkable memory and could remember a great deal from his childhood and from country life in Jutland at that time, and he knew all the old Danish patriotic songs.’ In Karen Blixen’s book Out of Africa, there is a chapter devoted to Aarup, in which she calls him ‘Old Knudsen’. She knew Peter had a daughter in Denmark – Anna Elisabeth, whose mother was Christine Svendsen, died young – and she asked Ingeborg to let her know he had died.

Blog by Christine Nicholls and the late Peter Ayre, 12 October 2018

The information for this blog was taken from the late Peter Ayre’s biographical database, which it is hoped will be made available to the public, and from Karen Blixen’s letters to Ingeborg Dinesen.